…or “Giáng sinh vui vẻ!” from Vietnam:) For Vietnamese people the climate during Christmas is pretty pleasant compared to the rest of the year. There are a lot of people celebrating Christmas, approximately half of Vietnam’s population. Nevertheless, Christmas as a religious festival is only celebrated by Christians, which are roundabout 8%.

The most important and often only decoration in the house is the Christmas tree. In Christian districts you can also find a lot of cribs on the street or in churches. In general, the churches are also decorated. However, almost all of the decoration in- and outside is very kitschy. A lot of colourful and blinking light, tinsel and big ornaments can be found almost everywhere.

In Vietnam, Christmas isn’t a family festival like in other countries. Surely, you first celebrate with your family, but afterwards the people normally celebrate with their friends. If you live in a city you often go out and eat a big fancy dinner for example. Still, it’s common to gift presents, which are opened in the evening of the 24th or at midnight.

There’s no traditional Christmas dish. Every family has their own meal. Some people follow the example set by the Americans and eat roast goose. 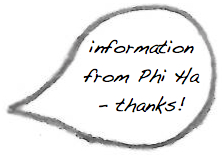